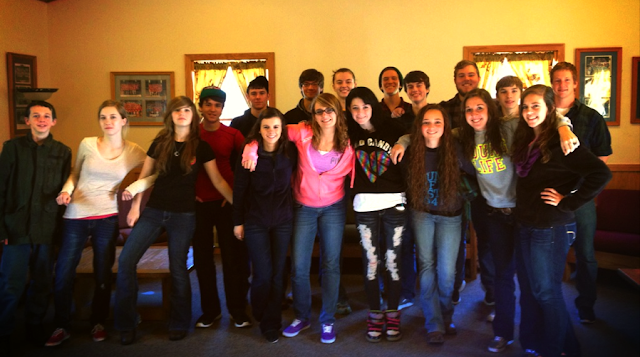 This past weekend, Jan 18-20, Staff Associate Kevin Parkhurst, and a few of the volunteer leaders took about 20 Floyd students to Rockbridge to do Work Crew. This meant that they volunteered their weekend to serve other kids who were having the best weekend of their life on a Wyldlife Winter Weekend. They worked in the Dining Hall, setting tables, serving each meal, cleaning the tables after meals and then setting them all over again. It was an awesome weekend, and the kids that were on Work Crew were so encouraged in their faith as they sacrificed their own weekend so others could have a great time. The idea behind Work Crew is that we would all be non-verbally communicating the gospel to the campers, as Jesus said in Matt. 20:28 "The Son of Man came not to be served but to serve, and to give his life as a ransom for many," as a work crew the kids did all they could to be an example of that verse and a reflection of Jesus Christ all weekend. The kids worked their tails off, but none of them regretted it. One of the kids who came, Josh, said at one point: "I would rather work here all the time than have a job that I get a paycheck, the pay off for this work is WAY better than any paycheck or amount of money I could have earned!" It truly was a fantastic weekend of serving others and the hope is everyone came home changed. That all who went trust Jesus a bit more than they did before!
Newer Posts Older Posts Home
Subscribe to: Posts (Atom)

Please note on Dates & Info for Parents the recent changes in dates/schedule for the remainder of the semester.